Princess Iris and The Rainbow Museum 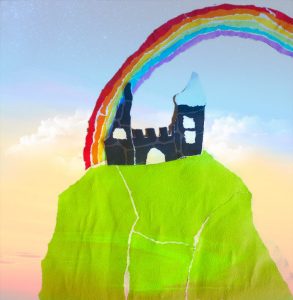 The parents of Iris happened to be a king and queen, but they were not rich. They lived on top of a hill in a run-down castle that the people called THE MUSEUM, because it had so many stuffy old paintings on the walls, and the stuffy old furniture was so worn out.

Three servants also lived in THE MUSEUM: an old maid, a fat cook and a gardener with moss in his beard. The gardener was also the driver of the king’s rusty old limousine.

The castle was full of drafts, the doors squeaked, and there were mice.

When Iris turned four she was the prettiest girl in the land, but also the saddest because she had no friends. No one was allowed to play with her in the castle because her parents were the king and queen. Princess Iris  often felt so lonely. Before she went to sleep at nights, she often wished, “If only I had an ordinary father and mother.”

When Iris turned five, the king and queen put on a big party to celebrate her birthday. All through the land they decorated the towns with flags, everyone had a day off work, and the people danced in the streets. The gardener with moss in his beard drove Princess Iris in the old limousine all over the  land. But wherever she came, people were sad when they saw how sad the little princess looked.

The story of the sad princess spread across the whole land. One day a handsome stranger from another country knocked on the old castle door. He wore a shiny purple suit, with ivory-white buttons, and a green hat with a feather in the brim.

When the old maid opened the castle door, the handsome stranger said, “I have come for the princess. I have heard that she is sad and I promise to make her glad.”

But the maid turned this handsome man away, as she always did with any strangers and tramps who came to visit. Nobody was ever allowed into the castle or garden unless they had a proper invitation.

So the stranger stayed the night in the tavern at the foot of the hill, and told anyone who would listen that he had come all the way from a faraway country to make the princess happy.

“How are you going to do that?” asked the innkeeper, while the regular guests listened. “The princess is all alone and lives in a gloomy castle.”

“Leave that to me,” replied the handsome stranger.

The old maid said, “Yes we do. Come in.” And she opened the door for the stranger. “You will get food and shelter every day but no money because the king and queen are poor.”

In the years that followed the stranger worked in the garden and turned it into the most beautiful garden in the world. The garden was so beautiful that Princess Iris loved walking in it whenever she felt lonely and sad. There was a pond and tall trees and flowers from all over the world that bloomed in all the colors of the rainbow. Princess Iris found them all beautiful. The colorful flowers always made her feel much better.

The king and queen were also happy in their beautiful, colorful garden.

Naturally many bees came to visit the flowers. The gardener collected and sold the honey from the bees. He buried the money he earned from the honey in a treasure chest under the biggest and most beautiful tree in the middle of the garden.

The king and queen could not decide who should be their daughter’s husband. Princess Iris had not seen anyone she wanted to marry either, and that made her feel so sad. “I will never be happy. I will be alone my whole life.” That evening she went to the pond in the garden, lay down beside it, and cried all night through.

Next morning, when Princess Iris woke, there was a beautiful rainbow in the sky. She pointed it out to the old maid who had come to bring her back to her own chamber.

While Princess Iris had been fast asleep, the old maid had tidied up after the party and made the castle nice and clean again. Everything smelled good. But there was bad news. The old maid told Princess Iris, “There is no trace of the cook. She has left the castle and  taken all the food from the pantry with her.”

“Oh dear, what shall we eat?” wondered Princess Iris. “My parents are old and we have no money left.”

Then the gardener knocked on the chamber door and the old maid let him in. The gardener said, “Princess Iris, year after year I have been collecting and selling the honey that the bees in the garden make for me. I have been saving the money in a treasure chest buried under the big tree in the middle of the garden. This treasure belongs to the royal family and you can use it to look after THE MUSEUM.” (Remember? The people called the castle THE MUSEUM because of all the stuffy old art and furniture inside.)

“You have solved our problem! How can I thank you?” asked the princess.

The gardener smiled at Princess Iris and pointed at the old maid. “You can thank me by asking her if she remembers turning away a stranger from the castle door, the day before the old gardener with moss in his beard died. Ask her if the stranger was wearing a shiny purple suit, with ivory-white buttons, and a green hat with a feather in the brim. Ask her if that stranger promised to make you happy.”

Princess Iris asked the old maid, “Is it true what he says?”

The maid smiled at the gardener and nodded. “Yes, his story is true.”

Then the gardener said, “Princess Iris, would you please also visit the tavern at the foot of the hill and ask the regulars, and the innkeeper too,  if they remember the stranger in the shiny purple suit, with ivory-white buttons, and a green hat with a feather in the brim. This stranger told them a story, the night before the gardener with moss in his beard died.”

Princess Iris laughed. She wanted to tell the handsome gardener, I already believe you, but he went on speaking. “Please ask the people at the tavern if they remember the story, and if they all say it is true, please ask the king and queen for permission to marry me. That is how you can thank me, for then I can keep my promise and make you forever happy.”

Princess Iris ran down the hill to the tavern and asked the innkeeper and the regulars if they remembered the gardener’s story.  And yes they did. It was true. Then Princess Iris felt so happy she laughed out loud all the way back up the hill and back into the castle.

“Pappa! Mamma!” she called as she ran into the dusty old throne room. The king and queen were sitting on their thrones looking sad and gloomy. They cheered up at once when they heard her story.

Princess Iris said, “So, the gardener has been selling the honey and saving the money in a treasure chest under the tree.” She giggled. “And now he wants to marry me and make me forever happy. Please, let me marry him, please say yes!”

When the king heard about the treasure buried under the tree he wanted to say yes to the wedding at once. But the queen was more careful. The queen asked Princess Iris, “Do you really like the gardener? Do you really want to marry him? Are you sure he will make you happy?”

Princess Iris laughed. “He will make me happy. Forever and ever more.”

So the king and the queen both gave their permission for Princess Iris to marry the gardener. Once again they organized a big garden party. But because this was a royal wedding, this time everyone from far and near was invited. When Princess Iris and the gardener promised to be forever faithful to each other, the most beautiful rainbow appeared in the sky.

“From now on,” the king proclaimed to all the wedding guests, “everyone will always be welcome in the castle and garden.” And from then on, everyone called the place THE RAINBOW MUSEUM. And Princess Iris and the gardener, the king and queen and the old maid, and all the other people in the land, all lived happily ever after.

The Rainbow Museum uses cookies to give you the most relevant experience by remembering your preferences and repeat visits. By clicking “Accept”, you consent to the use of all the cookies. However, you may visit "Cookie Settings" to provide a controlled consent. Read More
Cookie SettingsAccept
Manage consent

This website uses cookies to improve your experience while you navigate through the website. Out of these, the cookies that are categorized as necessary are stored on your browser as they are essential for the working of basic functionalities of the website. We also use third-party cookies that help us analyze and understand how you use this website. These cookies will be stored in your browser only with your consent. You also have the option to opt-out of these cookies. But opting out of some of these cookies may affect your browsing experience.
Necessary Always Enabled
Necessary cookies are absolutely essential for the website to function properly. These cookies ensure basic functionalities and security features of the website, anonymously.
Functional
Functional cookies help to perform certain functionalities like sharing the content of the website on social media platforms, collect feedbacks, and other third-party features.
Performance
Performance cookies are used to understand and analyze the key performance indexes of the website which helps in delivering a better user experience for the visitors.
Analytics
Analytical cookies are used to understand how visitors interact with the website. These cookies help provide information on metrics the number of visitors, bounce rate, traffic source, etc.
Advertisement
Advertisement cookies are used to provide visitors with relevant ads and marketing campaigns. These cookies track visitors across websites and collect information to provide customized ads.
Others
Other uncategorized cookies are those that are being analyzed and have not been classified into a category as yet.
SAVE & ACCEPT